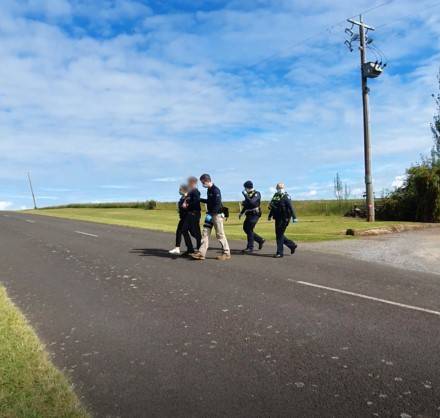 ARRESTED: A 57-year-old Macarthur man has been arrested and charged with serious firearm-related offences after a coordinated police raid on Tuesday.

An outlaw motorcycle gang member has been charged with serious firearm offences after a search warrant at a rural property in Macarthur yesterday.

As part of this process, a search of the property was conducted.

Police located two handguns, an air rifle, ammunition and a silencer, as well as a quantity of cannabis.


The man, who is also a patched member of the Mongols Outlaw Motorcycle Gang, was subsequently charged with a range of firearm-related offences, including possessing a traffickable quantity of firearms and failing to immediately surrender firearms when FPO served, as well as possessing cannabis.

Charges relating to FPOs are significant with 10 years imprisonment for acquiring, possessing, carrying or using a firearm or firearm related item.

The man was bailed to appear at Hamilton Magistrates' Court on April 20 next year.


Warrnambool police Inspector Josh Tink said seizing a significant number of firearms and firearm related items was a "great outcome for community safety in our region".

"We know illicit firearms often heavily feature in some of our most serious and violent crimes and the local community can rest assured that police will continue to target those involved in the use and trade of these weapons, particularly through enforcement actions such as this," he said.

"Taking a firearm out of the hands of a criminal, and making illicit firearms more difficult to obtain, are effective ways of preventing future offending and increasing public safety."

"FPOs are not issued only based on a person's criminal history with firearms - they are being issued to those people we know have a significant history of serious violent crime or who are linked to serious and organised crime groups, and some of their previous offences are not necessarily firearms related," he said.

"Yesterday's search and seizures were significant and involved specialist police such as Echo Taskforce supporting our regional police in targeting those with access to illicit firearms."

Police also arrested a 52-year-old man who was present at the property in relation to an alleged road rage incident in Port Melbourne in March this year.

He was subsequently charged with reckless conduct endangering injury and other traffic offences, and has been bailed to appear at Hamilton Magistrates' Court on April 13.


Once issued, an FPO remains in effect for 10 years for adults and five years for children, which is those between 14 and 17 years of age.

During that time, the individual is prohibited from acquiring, possessing, carrying or using any firearm or firearm related item such as ammunition.

They are also unable to enter a range of premises including firearms dealers, shooting ranges or firearms clubs.

Since they were introduced in May 2018, Victoria Police has issued over 1200 FPOs across the state.