Glocks allegedly imported into Australia using a post office have been linked by police to a number of crimes.

ONE was used to shoot the aunt of feared gangster ­Bassam Hamzy through the door of her home.

Another was found by a plumber hidden in a gym bag full of weapons under a house.

Others were sold to members of the Rebels and Lone Wolf bikie gangs, while yet another was allegedly used to rob an Armaguard truck ­carrying more than $1 million.

They’re just a few of at least 120 Glock pistols that found their way into the hands of the state’s underworld figures after being illegally imported by a gun-smuggling ring run out of Sylvania Waters Post Office, in Sydney’s south, and a neighbouring freight-­forwarding business.

The details emerged in the Downing Centre District Court last week, where two of the men responsible for the imports, the post office’s ­former licensee Andrew ­Botros and former freight-­forwarder Ahmed Karnib, pleaded guilty to their roles.

Police believe at least “106 complete Glock pistols” and “10 partial Glock pistols” the men imported are still in criminal hands, according to court documents tendered at their sentencing hearing.

Investigators have seized 14 of the pistols and laid charges against 15 people since police cracked the syndicate and launched a series of raids in March, 2012, court documents said.

Police believe at least “80 Glock pistol magazines” are also in circulation, court ­documents said, and further charges are expected to be laid. The syndicate spanned the globe, with the organisation buying disassembled handgun parts from Germany, the US and Switzerland.

The parts were shipped to Australia, passing through Customs with the help of forged export authorisation forms and labels disguising them as harmless items like “plastic frames”. They were then reassembled and sold.

Botros, 33, and Karnib, 24, were arrested with a third man, who cannot be named because he is still facing trial. The man has pleaded not guilty to a number of charges relating to gun importations.

Lawyers for Botros and Karnib, including Kiki Kyriacou, told Judge Peter ­Whitford SC that the pair were minor players and asked for them not to be jailed.

The pistols, legally only available to police and ­security forces, can sell for ­between $10,000 and $40,000 on the black market and are highly sought after in criminal circles.

The syndicate also planned to expand their gun empire by smuggling Glocks from Mexico, Lebanon and Ukraine, court documents claimed.

Before Botros and Karnib were arrested, one syndicate member told the German ­supplier he was “continuing to receive stock from Switzerland” and would have been ­ordering 100 Glock pistols a month “if they could be supplied more quickly”, court documents said. Gun magazines seized as part of the police operation into an alleged gun smuggling ring. Police made arrests after the investigation into the alleged gun smuggling ring. in Sydney.

The syndicate had ordered another 100 Glocks before the arrests and investigators seized another 20 pistols in Germany before they could be shipped, court documents said.

Police have so far seized the smuggled Glocks from various locations in NSW, from the Central Coast to Wagga Wagga and Surry Hills in the city.

Most were discovered in Western Sydney in the hands of people ranging from alleged heavy criminals to small-time players, the documents said. Maha Hamze, the aunt of Brothers for Life founder Bassam Hamzy, was allegedly shot by one of the Glocks.

One Glock was found at the Marrickville house of a man later found guilty of using it to shoot Brothers For Life Founder Bassam Hamzy’s aunt, Maha Hamze, through the door of an Auburn home in March, 2013, the ­documents said.

Lone Wolf bikie Fisiiaua Maile was jailed after being found with one of the Glocks in St Marys in October, 2012.

The same month BFL-linked John Saade was found with another gun inside the hidden compartment of a ­limousine in Merrylands. He was jailed.

The syndicate was inadvertently exposed by Ali Khaled, from Wiley Park, who is now in jail. In January, 2012, Khaled used one of the Glocks to shoot at his neighbour, who intervened in an argument between him and his girlfriend, the court documents said.

Police arrested Khaled and found the serial number had not been scratched off the gun.

It led police to the German town of Remscheid, where they discovered that legal gun trader Patrick Feige was duped into thinking the ­Sydney syndicate could ­legally buy the guns.

Firearms and Organised Crime Squad commander Mick Plotecki said the missing pistols may have been sold outside of NSW and that the soon-to-be unveiled national firearms interface may help track them down.

“Criminals are very good at recognising loopholes and ­exploiting them,” Det Supt Plotecki said. “We need to do everything we can to stay on top of those loopholes and shut them down.”

A sentencing decision will be handed down in May.

Police allege anywhere from 140 to 220 Glocks were imported into Australia from Germany in pieces through the post to Sylvania Waters Post Office and a neighbouring import business.

A third man, who cannot be named because of a looming trial, was also arrested.

January 29, 2012: A Glock 26 pistol, was recovered when police arrested Khaled after he shot at his Wilely Park neighbour.

May 4, 2012: A Glock 19 and empty magazine was found by a person walking their dog in a park on Pivetta St, Revesby. No one was charged.

May 19, 2012: A Glock 19 pistol found hidden in the backyard of a residence in Glenfield Park, Wagga Wagga, NSW, after it was allegedly used to shoot bullets into a nearby house in Tolland two days earlier.

December 20, 2012: Glock 26 found by police during a drug raid at an apartment in Rhodes. The pistol had allegedly been fired in a public place in Greenacre.

February 6, 2013: Glock 19 found in a safe at an apartment at World Square, Sydney, during a raid that uncovered cocaine and cash. 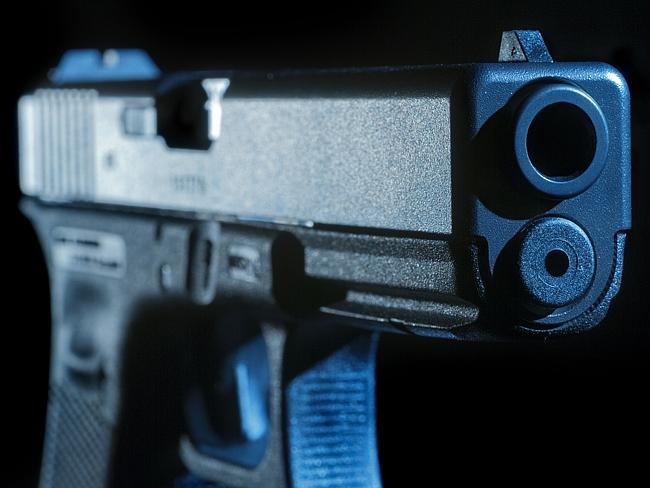 Details of where the guns allegedly ended up were revealed in court.

March 10, 2013: Glock 19 pistol found inside a Marrickville home that was used to shoot feared crime boss Bassam Hamzy’s aunt through a door. The shooter has also been charged with allegedly robbing and Armaguard van.

September 20, 2013: - Glock 19 found in the footwall of a stolen Mercedes C63 inside a garage at a residence Westmead.

11. BEN HAKE. TO BE SENTENCED IN DOWNING DISTRICT COURT

January 30, 2014: Glock 26 pistol found in a set of bedroom drawers during drug raid of property on Simmat Ave, Condell Park.

12. NO CHARGE. FOUND BY A PLUMBER UNDER A SURRY HILLS PROPERTY

September 13, 2014: Glock 19 found inside a bag by a plumber fixing a leak underneath a property on Bourke St, Surry Hills. The weapon handed in to police and no charges were laid.

November 26, 2014: Glock 26 pistol found inside a hidden compartment of Toyota Kluger whose occupants were arrested after they were following police in Punchbowl.

January 0, 2015: Glock 26 seized when Police searched a vehicle and box trailer parked at Edensor Park. Police also seized fully automatic firearms, and large quantities of methylamphetamine, heroin and ephedrine. Police awaiting evidence from the US before charges are laid.